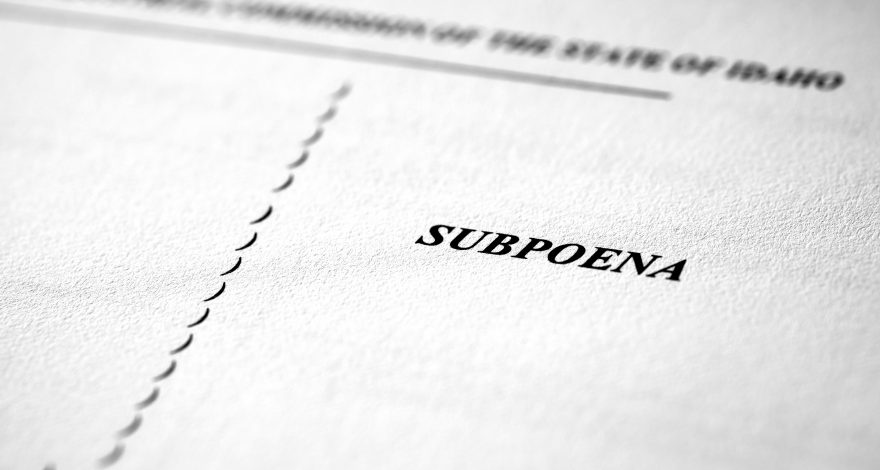 Barriers to Serving a Subpoena in China via the HSC

By: Tom On: May 7, 2019 In: Hague Service Convention, International Service of Process Comments: 0
Spread the love

In law, the devil truly is in the details, and frequently these details amount to a difference between what a judge orders and the real world’s ability to comply with that order.

At Legal Language Services we recently came up against one such incident when we were contacted by a client who had been ordered by a court to serve a subpoena on an independent third-party (TP) witness located in China. Importantly, the court ordered that the service of the subpoena be pursuant to the Hague Service Convention (HSC) rather than the Hague Evidence Convention (HEC).

1. Supportive case law is not applicable.

Another reason Aristocrat Leisure and similar cases[6] are not helpful when considering the requested court order at hand involves agency. In these cases, the court that ordered a subpoena be served upon an overseas entity via the HSC did so because the TP witness was deemed an agent of one of the parties to the litigation. Accordingly, because one of the parties to the litigation had sufficient control over the witness, the witness was compelled to produce evidence.[7]

In the case assessed by LLS, an agency relationship did not exist between the parties to the litigation and the TP witness. Thus the court has no leverage over the witness in this case.

2. The HSC is not a vehicle for taking evidence.

The preamble of the HSC sets out its scope: The HSC covers “judicial and extrajudicial documents to be served abroad.” Because the term “documents” is not defined by the HSC, at first blush a subpoena could reasonably seem to be a judicial document. Indeed, some US courts have taken this point of view.[8] However, both Conventions (HSC and HEC) adhere to the principle that lex fori controls what a Central Authority does or does not do.

So, just because a US court deems a document suitable to be transmitted via the HSC does not mean the Chinese Central Authority (or for that matter any overseas Central Authority) will hold the same view.

Herein is yet another barrier to serving a subpoena in China via the HSC. Under the HEC, evidence is taken pursuant to a Letter of Request,[11] not a subpoena. Accordingly, without a Letter of Request from a trial court, the notion that the US Central Authority would sign off on a mere subpoena of a TP witness in China strains credibility.

The need to have a request to take evidence in China pass through the US Central Authority also brings up some practical issues concerning formal document delivery in China.

If US litigation has entered the time-limited discovery phase, time to serve becomes critical. HSC service of documents in China will not occur for a year (or more) after the Chinese Central Authority has received a request for service. On the other hand, if the Chinese judicial system will execute a Letter of Request under the HEC, it will most likely do so within 3-6 months after the Chinese Central Authority receives the Letter of Request.[12]

So, when it comes to taking evidence, service by the HEC is much faster.

4. US courts do not have proper jurisdiction over the witness.

Now let’s assume that by some miracle a subpoena is serviced upon a Chinese witness via the HSC. The power behind a subpoena is found in a contempt of court proceeding. But before a court can hear any contempt proceeding, it must first have jurisdiction.

During the last decade, the US Supreme Court has severely narrowed the scope of personal jurisdiction.[13] In light of these cases, it is clear that if the witness is an individual person residing in China — absent a lot of purposeful contact with the US — a US court almost certainly would not have jurisdiction.

Moreover, the “at home” standard for courts to have jurisdiction over foreign corporations means that US courts are also very unlikely to have jurisdiction over a Chinese corporate TP witness absent a finding of some form of agency or intentional global reach of the corporation. Since US courts cannot enforce a subpoena through a contempt proceeding on an independent Chinese TP witness, why would the witness comply with the subpoena?

On the other hand, if a request for evidence is submitted from a US court to the appropriate court in China via the HEC, that court will have jurisdiction over the Chinese witness. There is no guarantee that a Chinese court will order the evidence requested in a Letter of Request be produced, but at least there is a possibility of obtaining evidence when requested pursuant to the HEC. In contrast, because the devil is in the details, transmittal of a subpoena to a TP witness in China pursuant to the HSC is not only costly, but also highly inefficient.

At LLS, we have more than 30 years experience serving subpoenas abroad. If you require assistance, contact us today.

An Important Barrier to Obtaining Electronic Service
Article 13 & the Influence of Politics in the Practice of International Law
Parsons v. Shenzen Fest Tech Co: A Lesson in Vendor Due Diligence
Spread the love
Previous
Attempting to Recover Nazi-looted Art Under FSIA
Next
How to Serve Process on Foreign Drivers
0 0 votes
Article Rating
Subscribe
Login