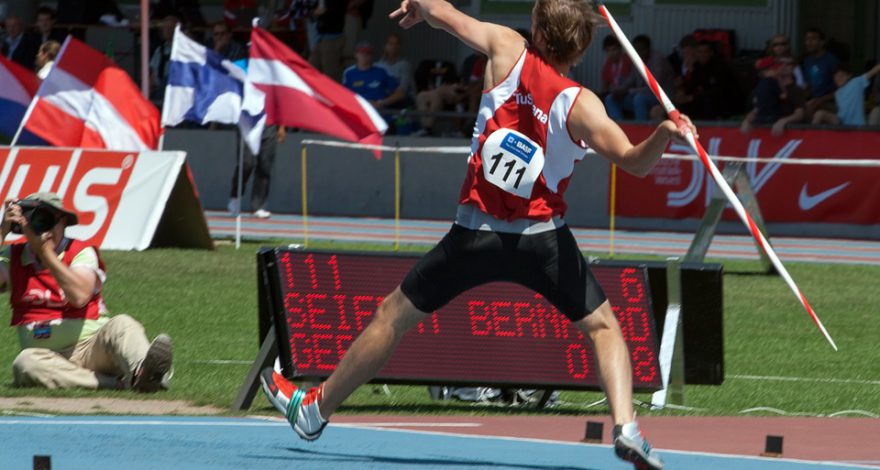 How the Javelin Affected Language Development

In a previous post, we opined that the development of a spoken language may have given man a competitive advantage over the great apes with respect to surviving the Pleistocene Epoch, which began about 2.6 million years ago and lasted until about 11,700 years ago.

Another competitive advantage that man then developed, and which greatly influenced the spread of spoken languages — specifically Indo-European languages (IELs) which would serve as the foundation for our modern English — was the creation and mastery of the javelin.

Cro-Magon Outlasts the Neanderthal with Help from the Javelin

At the end of the Pleistocene era, we find the Neanderthals competing with Cro-Magnon for the same territory and food.[1] Both were descendants of H. Erectus and both had language skills — although it is believed that Neanderthals were more brooding and laconic, while the Cro-Magon was more sociable and loquacious.[2]

But there was one other important skill difference between Neanderthals and Cro-Magon: The Neanderthals (who eventually went extinct) never learned to throw a javelin, whereas Cro-Magon developed this ability and became a successful hunter.[3]

Fast forward to the fourth century BCE where, in roughly the region of today’s Ukraine, the descendants of Cro-Magon develope the proto-Indo-European (PIE) language.[4]

By 3400 BCE, PIE had begun to fragment into its more modern components (e.g. Anatolian, a Balto-Slavic division of the IELs. And a few millennium later, IELs would give rise to English.

At the same time, in other parts of the world, other proto-languages were being developed and similarly begun to fragment into individualized languages.[5]

This raises an interesting question, how did a geographically restricted language that was developed in the Ukraine become the parent to most of the languages spoken in Eurasia?

The Javelin Enables the Spread of IELs Through Conquest

With one exception, when IELs spread, they always entered regions where there was already an indigenous (or an incumbent) language being spoken. Thus, IELs had to displace the indigenous languages.

So, the easy answer to how did the IELs spread is through conquest. But this answer just begs the question: conquest by what means?

The Ukraine is just a small part of the Eurasian Steppe, which is a “belt of grassland that extends some 5,000 miles (8,000 kilometres) from Hungary in the west through Ukraine and Central Asia to Manchuria in the east.”[6] Because this grassland is unsuitable for agriculture, the inhabitants of the Steppe — even today —  live a nomadic existence.

Yet, the grasslands of the Steppe did provide the nomads of this region with something nomads living elsewhere lacked: horses.

The Rise of Chariot Warfare

During the 4th century BCE, the nomads of the Steppe domesticated horses and later invented the chariot — the super technology of its day.[7]

In the 2nd and 3rd centuries BCE, war was waged by two infantries squaring off and fighting each other with swords, pikes, and bows and arrows. Once the chariot appeared, however, warfare changed.

Positioned inside the chariot were a driver and an archer. The archer’s job was to take out as many troops as possible. This proved a handicap to the infantry who now not only had to hit a moving target, but also a target (i.e., the chariot) that could suddenly change directions.[8]

Given the advantages of chariot warfare, if a country[9] wanted to survive, it needed chariots of its own. In 1273 BCE, for example, in what would become one of the world’s largest chariot battles, the Egyptians under the leadership of Ramses II famously fought the Hittite Empire to a draw at the Battle of Kadesh.[10]

How the Javelin Lead to the Chariots Demise

After the Battle of Kadesh, the use of chariot warfare began to wane. In part this was because the peoples who lived beyond the Steppe learned to ride horses[11] and infantry soldiers learned how to better protect themselves through the use of techniques like the hoplite phalanx.[12]

But the key reason for the demise of chariot warfare was the use of the javelin.[13] A horse made for a much bigger target for the javelin thrower – and once the horse was severely injured, the chariot, its driver, and its archer were easily overcome.

The Lasting Legacy of the Javelin

Today, we do not often think of the javelin unless we are watching a track and field event. But the javelin had a big impact on history. It not only allowed Cro-Magon to evolutionarily push aside the Neanderthals, but it was also largely responsible for the obsolesces of the first super weapon and the spread of IELs.

Notes
[1] Brian M Fagan, Cro-Magnon: How the Ice Age Gave Birth to the First Modern Humans, 2010.
[2] Id.
[3] Id.
[4] Cristian Violatti, Indo-European Languages. 05 May 2014; https://www.ancient.eu/Indo-European_Languages/
[5] For example, see the discussion of Semitic Languages in David Testen, Semitic languages. Encyclopedia Britannica; https://www.britannica.com/topic/Semitic-languages. (sic.)
[6] William H. McNeill, The Steppe. Encyclopedia Britannica; (sic.) https://www.britannica.com/place/the-Steppe
[7] Christopher I Beckwith, Empires of the Silk Road, A History of Central Eurasia From the Bronze Age to the Present, 2009. Interestingly despite these innovations, the people of the Steppe where not the first to ride the horse – that honor belongs to the Iranians. Id.
[8] Id.
[9] The concept of a “nation” did not exist before the 1648 Treaty of Westphalia.
[10] The battle was concluded with the signing of the world’s first written peace treaty.
[11] See supra note 8. Alexander the Great’s success was due not only to his tactical skill, but also of the cavalry he possessed. Id.
[12] Joshua J. Mark, The Greek Phalanx. Ancient History Encyclopedia (2012); https://www.ancient.eu/article/110/the-greek-phalanx/
[13] See supra note 8.

Notaries vs Notarios: Dramatic and Perilous Differences
The Evolution of Language and Climate Change
How Much Do Lawyers Really Know About Language?
Spread the love
Previous
The Mechanics of Filing for Article 15 Default Judgments
Next
The Challenges of Taking Voluntary Depositions Abroad
0 0 vote
Article Rating
Subscribe
Login

Since 1983, our mission has been and remains to provide law firms, sole practitioners and even governments with confidential, time-sensitive language and litigation solutions. When you need professional translation, interpreting, transcription, or legal support services, think Legal Language.