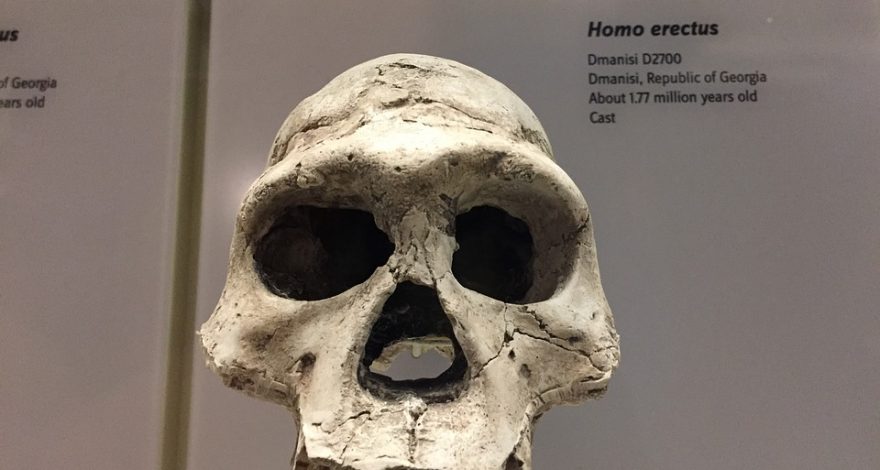 The Evolution of Language and Climate Change

Due to a lack of fossilized remains, controversy exists concerning when, where, and how language developed. Implicit in this discussion is the notion that language is spoken. But it is a pretty safe bet that (based on current observations of animals) inter-species communication is not dependent on the development of language.

A favorite hypothesis of modern linguistics is that sign language served as antecedent to modern language. From this perspective, when early ape-men roamed the earth, the increasing adoption of a bipedal posture allowed our ancestors to communicate by sign language. Indeed, in the modern world chimpanzees have a well-developed system for sign language communication. But, how far back in time does sign language go?

Lucy’s remains were found in Ethiopia in 1974 by Donald Johanson and Tom Gray.  Lucy, who lived 2.8 to 3.8 million years ago, was a member of the Australopithecus afarensis “tribe” of hominoids. By Lucy’s time man had already branched off from the apes.

Lucy was thought to be bipedal and to have physical features similar to both chimpanzees and man. So, Lucy certainly had the capability to communicate via sign language, even if she was born long before the “invention” of language (50-100 thousand years ago). However, there is no current evidence to suggest that Lucy ever signed.

So is this a case of the absence of evidence being evidence of absence? Hold that thought.

After a million years or so, Lucy’s progeny produced the hominoid Homo erectus. It was the Homo erectus who tamed fire and invented language. Homo erectus’ progeny would give rise to a number of hominoid species, including Neanderthals, Cro–Magnons, and Homo sapiens (which would be us).

Why did Man alone survive the Ice Ages?

Perhaps it was because Man developed language and the other hominoids did not. Language would have allowed for communal efforts to cope with the cold. But if this was the case, how did the Chimpanzees and other apes survive the Ice Ages?

While Chimpanzees and other Great Apes make noises, linguists do not consider these creatures to have any form of language as we know it. Then again, the Chimpanzees could use sign language to organize communal action. Just because chimpanzees did not pass on sign language to Lucy and other Australopithecus afarensis does not mean they didn’t utilize it themselves.

Do you require sign language or other interpreting services? Contact Legal Language today to learn about our professional interpretation services.

Consecutive Interpreting vs. Simultaneous Interpreting: How They Work & When to Use Them
ASL Interpreting, VRI, & COVID-19
Are You Legally Required to Translate Consumer Contracts?
Spread the love
Previous
Can You Contract Your Way Out of Hague Convention Service?
Next
Did the Volkswagen Litigation Hit a (Small) Speed Bump?
language, language evolution, language news
0 0 votes
Article Rating
Subscribe
Login

Homo erectus’ progeny would give rise to a number of hominoid species, including Neanderthals, Cro–Magnons, and Homo sapiens (which would be us).

Homo erectus’ progeny would give rise to a number of hominoid species, including Neanderthals, Cro–Magnons, and Homo sapiens (which would be we).